A Brief about Festival

Festival which known as Tshechu is a religious festival meaning "tenth day" which held annually in various temples, monasteries and dzongs throughout the country.

The Tshechu is a Buddhist religious event celebrated on tenth day of a month of the lunar calendar corresponding to the birthday of Guru Rinpoche (Guru Padmasambhava).

Tshechus are grand events where entire communities come together to witness religious mask dances receive blessings and socialize. In addition to the mask dances, tshechus also include colourful Bhutanese dances and other forms of entertainment.

It is believed that everyone must attend a Tshechu and witness the mask dances at least once to in order to receive blessings and wash away their sins. Every mask dance performed during a Tshechu has a special meaning or a story behind it and many are based on stories and incidents from as long ago as the 8th century, during the life of Guru Padmasambhava. In monasteries, the mask dances are performed by monks and in remote villages, they are performed jointly by monks and village men.

Two of the most popular Tshechus in the country are the Paro and Thimphu Tshechus in terms of participation and audience. Besides the locals, many tourists from across the world are attracted to these unique, colorful and exciting displays of traditional culture.

AN OUTLINE OF PARO TSHECHU

The Paro Tshechu is one of the biggest festivals in the country.    On the first day, all mask dances are held inside the courtyard of the Dzong. In the subsequent days, the courtyard outside the dzong hosts the festival.

The very morning on the last day of the celebration the monk of the Paro Dzong display a gigantic Thangka (embroidered painting) the Guru Rinpoche’s Thongdrol, inside the Dzong. Please visit to Bhutan to correspond with this religious festival it’s held on March 17 – March 21, 2019.

THE HIGHLIGHTS OF THE PARO TSECHU TOUR

The ‘Paro Tsechu’ festival tour includes one of Bhutan’s most popular festivals. Join locals in a colourful celebration of Bhutanese culture and faith. This Bhutan tour also explores the cultural western and historical central valleys of Bhutan.

Arrive at the Paro International Airport from Bangkok, New Delhi, Singapore, Bangladesh and Kathmandu. You will be receiving by The Traveller Trails Team. Paro is situated at in a beautiful valley at 2280m and, is a fitting introduction of Bhutan

You will transfer to Thimphu on a short one hour drive along Paro and Thimphu valley with the magnificent view of Tamchog Lhakhang.

Tamchog Lhakhang, built in 1420 by Thangthong Gyelpo who was phenomenal architect and saint as well. He has built many iron bridge in the country, one in which connect to Tamchog Lhakhang. Take a late afternoon work around Thimphu city.

We will start the day with a visit to the revered Memorial Chorten, The huge statue of Buddha Dordenma, which commands a tremendous view of Thimphu valley.  The huge 3-storey throne holds several chapels and the body itself are filled with 125,000 smaller statues of Buddha.

Then Changangkha temple, perched on the hilltop overlooking the town.  Devotees flock throughout the day to circumambulate and turn the prayer wheels.  The temple also contains beautiful wall paintings and hundreds of religious scriptures written in gold.

Then visit the Takin Reserve showcasing the unique national animal, the Takin. You can also browse the striking collection of intricate textiles at the National Textile Museum or visit the Folk Heritage Museum.

In the afternoon you can take in more of the sights and culture of the capital, with the option of a trip to Simtokha Dzong (one of the oldest fortresses in Bhutan, dating from 1629 AD). If you prefer to stay closer to town you could visit the postal museum, detailing the history of Bhutan’s postal system and showcasing Bhutan’s rich assortment of interesting stamps.

If you would like to view or buy Bhutanese handicrafts you may like to visit the handicraft market, which has an array of stalls run by local handicraft shops selling purely home made articles.

In the morning drive approximately 3 hours to the old capital, Punakha, via Dochhu La pass at 3050 metres, where we will stop for a hot drink and enjoy spectacular panoramic views of the Eastern Himalaya ranges.

You will notice the change of climate and vegetation as we approach low-lying Punakha at 1250 metres.

Take a pleasant walk for an hour across the terraced fields of Sopsokha village to Chimi Lhakhang (Temple of Fertility) built in the 15th century by the ‘Divine Madman’ (Lama Drukpa Kuenley).

In the afternoon, we will visit the imposing Punakha Dzong, “Palace of Great Happiness”.  Built in 1637, it is strategically placed at the confluence of two rivers, Pho Chhu (Male River) and Mo Chu (Female River)

We will rape up the day with the visit to country’s longest suspension bridge hanging over Pho Chhu, few hundred metres from Punakha Dzong.

Today we return to Paro, a drive of approximately 4 hours.  In the afternoon you can start your culture tour of Paro valley by visiting the impressive Paro Rinpung Dzong, one of the finest examples of Bhutanese architecture.

You can also visit the National Museum.  This was previously housed in the Ta Dzong (watch tower) built on top of the hill above Rinpung Dzong to defend Rinpung Dzong and the Paro valley during times of war, in an unusual circular construction resembling a conch shell.  Unfortunately, an earthquake in September 2011 damaged the Ta Dzong and the contents of the museum were moved to a neighboring building.

You can still see a magnificent collection of Bhutanese artefacts – costumes, religious paintings, arms, textiles and a fascinating collection of Bhutan stamps.  The National Museum is due to reopen in the Ta Dzong in 2017.  Near to the museum you may also be able to see a demonstration of traditional wood turning skills by local artisans who make traditional wooden bowls and cups – and you can try your hand as well if you wish.

Today is the last day of Paro festival; we will start the day little early with the visit to the festival ground for the blessing.  The very morning on the last day of the celebration the monk of the Paro Dzong display a gigantic Thangka (embroidered painting) the Guru Rinpoche’s Thongdrol, inside the Dzong. Please visit to Bhutan to correspond with this religious festival.

We will engage the day at the festival ground interacting with the locals who came to watch the festival.

Take a day walk to the ‘Tiger's Nest’, the sacred Taktshang monastery which clings to the rock face 900 metres above the valley floor. Guru Rinpoche is said to have flown to the site riding on a tigress.  He subsequently meditated here for three months.  It is one of Bhutan’s most holy sites and draws pilgrims not only from Bhutan but also from neighboring Buddhist countries.  You can have lunch at the Taktshang cafeteria from where you get a spectacular view of the monastery.

You can have lunch at the Taktshang cafeteria from where you get a spectacular view of the monastery. You can also visit the 7th century Kyichu Lhakhang, a temple of historical significance and one of the most sacred shrines in Bhutan.  Alternatively you may be interested to visit a manor house turned museum in a local village.  The house dates from the 17th Century and the museum is designed to showcase the culture of medieval rural Bhutan.

Early in the morning your guide will accompany you to the airport to see you off onto your flight and wish you Tashi Delek (goodbye and good luck). 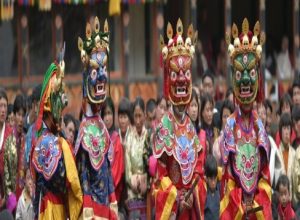 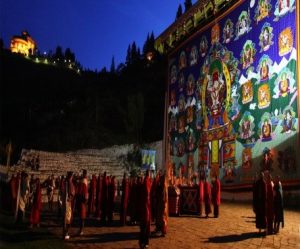 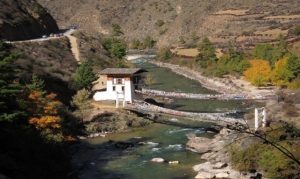 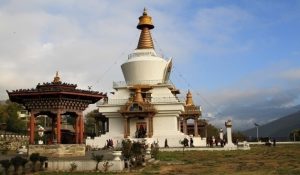 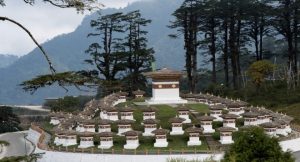 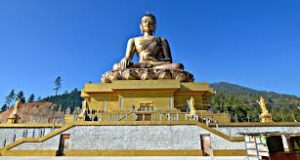 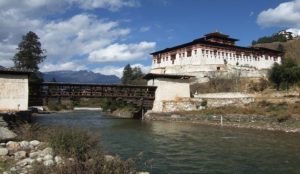 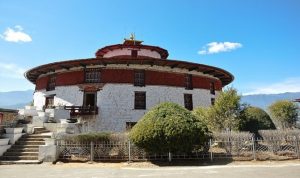